Act 1 : Des Grieux is a melancholic student, outside, with friends, in France. A coach arrives, bringing Manon, a young woman on her way to convent (forced by her father), and Géronte, an old man who wants to abduct Manon and live with her in Paris. Des Grieux understands what’s happening, falls in love, and Manon and him escape in Géronte’s coach. Voilà !

There’s a huge, gap, an ellipsis, between Act 1 and 2 : what happened to the young couple ? Why did Manon choose Géronte, quitting her young lover ? Money ? Bore ? Stupidity ?

As a Puccini lover, I watched many versions of this opera. And I found out something, a question appeared :

What does Manon Lescaut want?

So I began to explore books and the web to find out. Kiri Te Kanawa (with a marvellous Placido Domingo as Des Grieux) is a splendid, crystal innocent Manon. She floats onto what life brings to her, like a little cork on the sea. Elsewhere, Astrid Weber plays an upstart woman, mocking secretly and using Des Grieux as a purpose to escape her fate.

These are two very interesting ways to interpret the character. Because you will fill the blank (ellipsis) in VERY different ways !

From this to that, I saw many ways to put Manon to life. Is she a punk ? A feminist ? An idiot ? Does she choose anything ? What do you think ?

Manon is a blurry character. We often don’t understand her. Her behavior is complex, living, changing all the time : she is a weathercock !

In Act I, she’s a sad, frightened country girl sent off to a convent. In Act II, she’s the consort of a wealthy old man, sarcastic and bored. This activity doesn’t address Act III, where she’s in prison for allegedly stealing from that old man, but Act IV finds her experiencing the consequences: wandering helpless, full of regrets, in a vast American desert.

Tool : Ah c’est tellement passionnant when you don’t have all the keys. When a single glance can change all the story ! Who’s evil ? You don’t know. What if in your work you didn’t give “all the keys” to the audience ? Chop one or two, just to see… 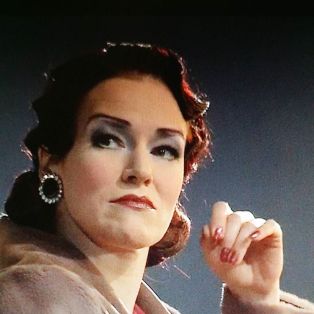 Tool : One of the pleasure of Classical Music is to compare versions. You can have days and days of pleasure.

Dial : Another article is needed : “In Love with a Project”. Soon.

“Without Music Life would be a Mistake”

You can find this quote from Nietzsche on all kinds of tee-shirts.

In fact, you can replace “Music” with some other pleasant words, like “Wine”, or “Love”, or “Philosophy”, “Fashion”, who cares ? Is it an order, some kind of pressure ?

Of course, without music life would not be a mistake AT ALL.

If you suddenly take seriously how music is important to people, you’ll be SO surprised that you will be floored. I use this “floored” expression because I’m french and I LOVE it. Floored, you on the floor, voilà pour vous.

I asked about the opera, one day. One loves opera because of the magic of the place. Some because of the archetypal terrible stories. For some others, it’s the performance of the singers (ahhhh the “high notes” !). Some guys are in love with one voice only (Callas !). Some guys love only one composer (Wagner, or for me : Puccini). Many love opera and only opera. You can find fools who love to collect all versions of the same thing. Etc.

You should and you have to think about it when you want to SHARE a music. You give YouTube links to your lover and most all the time you’ll be surprised. She doesn’t care. What moves you does nothing to the others.

Personaly I love risky modulations (I love Mike Oldfield, John Barry, Progressive Rock and Royksopp, and Puccini, and Prokofiev for this reason). I love to analyse production (Floors of sound in Depeche Mode Violator, different veils in Brian Eno’s work). I love crescendos. I love when the magic is hidden in a mist (Royksopp, Blonde Redhead). I love David Sylvian’s voice. OK I stop here. What about YOU ?

Do not think that you have a human typology in mind. You’re wrong.

(and fuck Nietzsche on this quote)

Digital does not really exist ?

In music, movies or art, on peut digitaliser most of the process. Let’s take the example of music on Compact Disc, or in mp3 on your computer. A bunch of zeros and ones, that’s all.

Music is coded in digits. This information goes through processors, an Audio power amplifier, then to loudspeakers, etc… In this chain, digits disappear. Yesss they do ! Loudspeakers do their stuff :

No digits anymore : Soundwaves (oh the pretty word) are NOT digital. All this analog-magic flows into your ears (which are not digital either), and finally your ears inform your brain (which digital is not).

Your CD is maybe a DDD, but reality is more DDDAAA, here’s to you. Bim.

What is your side ? 1/ you like LPs because you say the sound is “warmer” ? 2/ you are a high end hi-fi geek, and you like perfection of DDD ?

Music can be coded in zeros and ones, but in the end analog soundwaves dance in the air, your brain activates pleasure, and feelings, and souvenirs. Happily !

The tool says : Breathe ! In the end, you’re always an imperfect guy (or lady). Choose your weapon, warm or perfect. Dial measure is “less or more pleasure”. That’s all what it is. Whatever digital or analog…

Three-quarter Strength.  A work that is meant to give an impression of health should be produced with three-quarters, at the most, of the strength of its creator.  If he has gone to his farthest limit, the work excites the observer and disconcerts him by its tension.  All good things have something lazy about them and lie like cows in the meadow.

Nietzsche – Human, All Too Human

If you understand Nietzsche and you push this concept on the movies-area, you’ll find that there are many “too much tension” (and too many ideas) movies in the world. They are great, but only real masters manage to reach what I could call the Three-Quarter Strength Quality, merci Nietzsche. Casualness or nonchalance ? What is it exactly ?

Intention of effect kills the effect. When all levers (virtuosity, music, speed, invention, scénario, whatever) are pulled, it’s interesting, fascinating, intense, but you miss something. It’s exhausting…

You find the Three-Quarter Strength Quality in some movies of Fellini (oh these lights moving on the walls in 8 1/2), in Godard (are these really “errors” in Breathless ?), even in Spike Lee’s work. There are useless dialogs in some Wes Anderson’s movies. The cheap budget of Serenity is totally accepted. Think also about all the oblique explanations in Twin Peaks. John Ford has his own way of “to not insist” on a good scene. Add John Huston’s Prizzi’s Honor. Grifters (Frears). Etc…

It’s a easyness, a casualness, an actor taking his time, a scenario which does not explain everything, a flaw in a camera movement, some rules not really followed at times…

When you know, you’ll notice this in many great movies. It’s powerful !

Tools & Levers : My, it’s easy to understand. Apply this Nietzsche thought to your work, your invention, your writing. Be smart, 25% casual, breathe, and you go girl !

(and OK I’m french, I wrote this with a little more than 25% of nonchalance, sorry)