To direct an opera is certainly a mess! You have to deal with a “text and music” system, then with musicians, singers, light, settings, the past… all this with a vision, right?

I read an interview of Claus Guth who directed a La Bohème (Puccini) in Paris this winter. Here are his ways :

La Bohème is about poor artists in Paris in the 1830s. For me it’s the best opera ever! Therefore I’m never annoyed by directing transpositions in other styles, the fifties, or other countries, etc. It can be ugly, but it’s most of the time interesting. I really think that we can do anything with a masterpiece : you’ll never hurt it really. Playing with archetypes, putting’em into other universes, it’s often amazing!

I have to say that I already watch dozens of La Bohème happening in the streets of Paris and in frozen attic rooms (2nd picture). Guth decided to put it in space (!) (1st picture), in a lost spatial station, playing with a game of souvenirs, double characters, etc…

As they say in Libération, the French newspaper, it was “sidereally staggering” ( http://next.liberation.fr/theatre/2017/12/07/une-boheme-siderale-et-siderante_1615146 )

“we were flabbergasted (under the scream and catcalls) because we were suddenly seeing the bohemian lifestyle, from 1840 or 2017), on stage, all naked : artistically battybonkers, suicidal, not looking for approval, desesperate and sparkling like in a dream plunge to escape the misery of life”…

It’s true that the idea of Bohemian life (being a poor artist, with casualness and freedom (and parties and alcohol) it implies) is a problem : there’s a lie, a too big differences between your ideals and the reality…

I wrote this article to throw a few tools on my little table :

These tools are somewhat obvious. Where will we apply them? Poetry? Photography? Couple? Teams? Companies? Literature?

Thanks for reading, and sorry for my English…

END_OF_DOCUMENT_TOKEN_TO_BE_REPLACED

Don’t go, it’s about opéra but it’s short and there’s a pest!

La Bohème is this Puccini opera happening in Paris. Let’s make it quick :

Rodolfo is a poor writer living with a few pals (Marcello the painter, Colline the philosopher, Schaunard the musician) in the Latin Quarter (Paris) in the 1830s. He meets Mimi, who lives in another room in the building. They’ll become lovers (of course).

In the Act II, the four friends+Mimi are in a restaurant within a great crowd. Comes Musetta, “formerly Marcello’s sweetheart” with an elderly admirer. She’s hoping to reclaim Marcello’s attention, and Marcello is furious, jealous, and… in love. All this in songs!

We all have our comfort food, comfort film, comfort anything.

My COA (Comfort Opera Act – YESSS it can beeee) is Act II of La Bohème.

It’s fast, rich, crowded, full of surprises (lovers, drama, plenty of fun, kids, a Parpignol (who sells toys to kids)) and there’s a happy fanfare at the end!

Musetta is the bigger than life pest-and-pretty. Opera is exaggeration? Musetta is bigger than crazy, and the singers who play her have obviously plenty of fun.

There are hundreds of ways of playing this character. Some days, I compare (YouTube is your friend) and I laugh a lot : Poor Marcello! 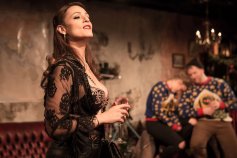 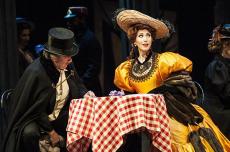 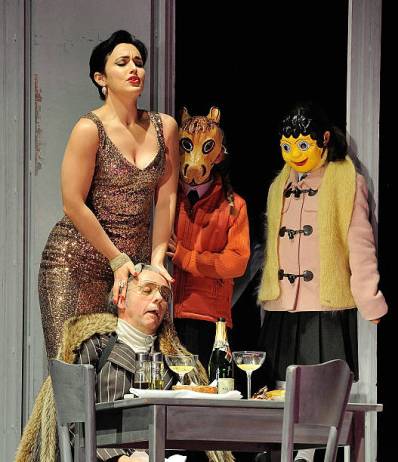 Game : Find Musetta in this finale :

If you’re an explorer, you sometimes discover an artist you… adore.

It’s so good that you can’t resist : here you are exploring the whole chest, pigging out the whole thing. We are all lost souls, craving for…

But sometimes you climb “one more degree”. It’s so good that you decide something.

Keep a part for later. More in reserve. Some gas left in the tank.

This is what I did with a few masters : Puccini, Chekhov, Faulkner, Borges, Jünger. Who are yours?

I know Manon and La Bohème by heart, and pretty well some of other Puccini’s operas, like Tosca or Butterfly, and one third of Trittico. Each time I listen to a part of Turandot I’m floored… but I keep it for later!

Chekhov wrote hundreds of short stories. I have shelves of that guy! But I never read “everything”. It’s the same for Jünger or Borges, or Faulkner. 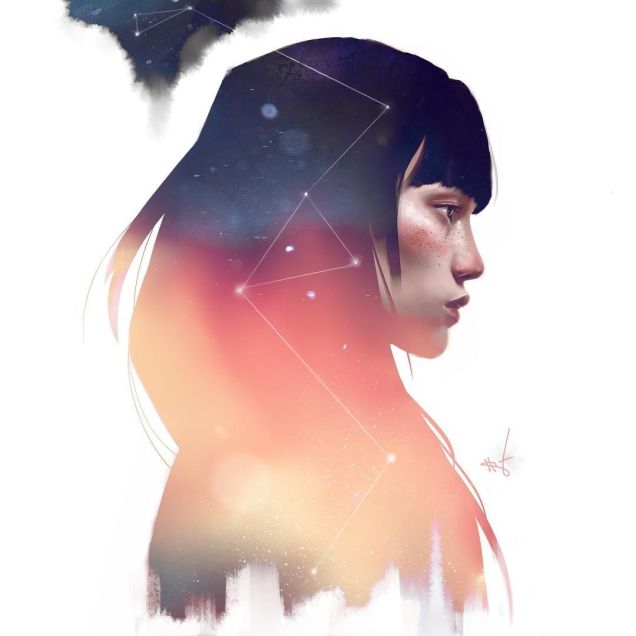 Act 1 : Des Grieux is a melancholic student, outside, with friends, in France. A coach arrives, bringing Manon, a young woman on her way to convent (forced by her father), and Géronte, an old man who wants to abduct Manon and live with her in Paris. Des Grieux understands what’s happening, falls in love, and Manon and him escape in Géronte’s coach. Voilà !

There’s a huge, gap, an ellipsis, between Act 1 and 2 : what happened to the young couple ? Why did Manon choose Géronte, quitting her young lover ? Money ? Bore ? Stupidity ?

As a Puccini lover, I watched many versions of this opera. And I found out something, a question appeared :

What does Manon Lescaut want?

So I began to explore books and the web to find out. Kiri Te Kanawa (with a marvellous Placido Domingo as Des Grieux) is a splendid, crystal innocent Manon. She floats onto what life brings to her, like a little cork on the sea. Elsewhere, Astrid Weber plays an upstart woman, mocking secretly and using Des Grieux as a purpose to escape her fate.

These are two very interesting ways to interpret the character. Because you will fill the blank (ellipsis) in VERY different ways !

From this to that, I saw many ways to put Manon to life. Is she a punk ? A feminist ? An idiot ? Does she choose anything ? What do you think ?

Manon is a blurry character. We often don’t understand her. Her behavior is complex, living, changing all the time : she is a weathercock !

In Act I, she’s a sad, frightened country girl sent off to a convent. In Act II, she’s the consort of a wealthy old man, sarcastic and bored. This activity doesn’t address Act III, where she’s in prison for allegedly stealing from that old man, but Act IV finds her experiencing the consequences: wandering helpless, full of regrets, in a vast American desert.

Tool : Ah c’est tellement passionnant when you don’t have all the keys. When a single glance can change all the story ! Who’s evil ? You don’t know. What if in your work you didn’t give “all the keys” to the audience ? Chop one or two, just to see…

Tool : One of the pleasure of Classical Music is to compare versions. You can have days and days of pleasure.

Dial : Another article is needed : “In Love with a Project”. Soon.

OK I’m french. My english is a frenglish, it’s rusty and wobbly, et voilà. Try me, though. I’ll do my best. I promise. If sometimes it’s too bad, just laugh at me or roll your eyes.

In front of impressive masterpieces you can find yourself very SHY. It happened to me a few years ago with La Recherche, by Proust : In Search of Lost Time, a pack of seven big books, you know, MMMasterpiece of Masterpieces, blabla. I bought it and never dared to begin ! How to read this ? With what kind of solemnity ? Terrifying ! (I’d add : poor you, if you have to read this in English and deal with the choice of translation).

You may also have this feeling in front of a domain you know rich, but you don’t know a penny about it. I had to handle this when I decided to open the door of the Opera territory. From where to begin ? Which composer ? Mozart ? Wagner ? Who ?

Shy as a little chicken in its shell, I began to read books about Proust. In one of them the author was angry at me. Really ! He was saying something like I was silly to be solemn about La Recherche, advising me to shup up and read what I want, in the order I want, and to let go “annoying pages” (!). It was as if a good father was talking to me, so I obeyed, and it was perfect.

After trying a little Verdi (boriiiing) I searched for the “next Italian composer”, found Puccini, and I… didn’t know what to do. Each opera was very long ! And there were many…

I remembered Proust and I tried not to worry too much : How to choose a first opera to listen to ? Director ? I began to wander randomly on YouTube and I listened to things with  little “I don’t care” ears. Of course, it worked.

I remember it in the most crystallest clearest way : Manon Lescaut was singing somewhere in my headphones as I was writing an email. The music then began to stop me. One time. Two times. Three. I had to really stop writing, like “Heyyyyy ??!”. Le plaisir was slipcrawling into my brain.

I got it ! The wire. I pulled it, and now I love Manon Lescaut, and Il Trittico, and La Bohème, etc.

1/ Don’t care that much about Masterpieces (with big M capital). You won’t hurt them ! These are not Cathedrals of Culture. Let go. Breathe. Find your own entrance. A lateral one. Then the kingdoms of pleasure are yours.

2/ Loosen your belt. And your tie. Be casual. The Masterpiece is probably a real one. IT WILL CATCH YOU ANYWAY. 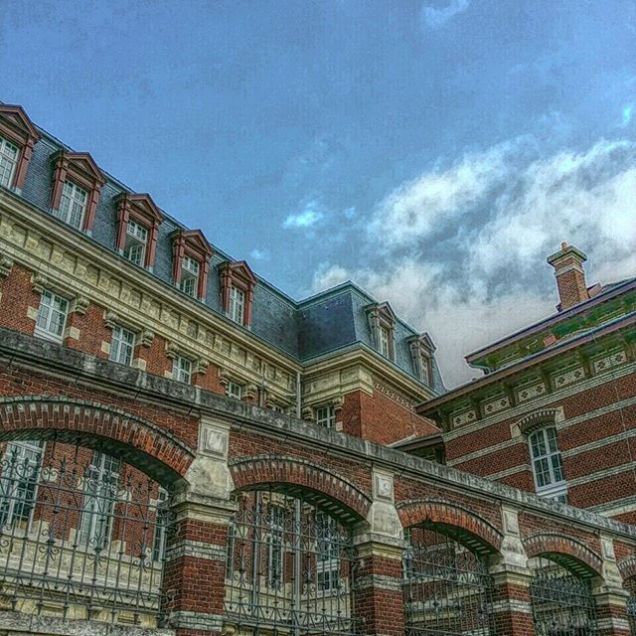 OK I’m french. My english is a frenglish, it’s rusty and wobbly, et voilà. Try me, though. I’ll do my best. I promise. If sometimes it’s too bad, just laugh at me or roll your eyes.

Wiki says : “A syndrome is a set of medical signs and symptoms that are correlated with each other and, often, with a specific disease.”

The Abba/Puccini syndrome is easy to explain. It’s a misunderstanding. Or a miscomprehension, allez savoir !

Abba was VERY popular, but a whole bunch of people hated them, rockers, indie critics, etc. Today most of the haters are… in a awe, they are embarrassed, they say “OMG they were, in fact, so good”. On every floor : Melodies. Hits. Production. Voices. Modernity. Melancholy. Arrangements.

Puccini is the most played opera composer in the world. La Bohème, says Wikipedia, “remains one of the most frequently performed operas ever written”. Victim of its own popularity, he’s often seen as the composer of opera “hits”, like Nessun Dorma. And, at many moments, he’s obviously Italian (ce côté éperdu et ensoleillé du Nord de l’Italie). And this HIDES the modernity of his music. Puccini was admired by composers like Schoenberg, Ravel, and Stravinsky. Experiments and strange harmonic progressions colour the fabric of his music. You just have to listen what is “under”, or watch closely his funny way to drive harmony like a racing car :

Dial : Some artists can be victims of popularity, but this syndrome is double worse : success hides sophistication. 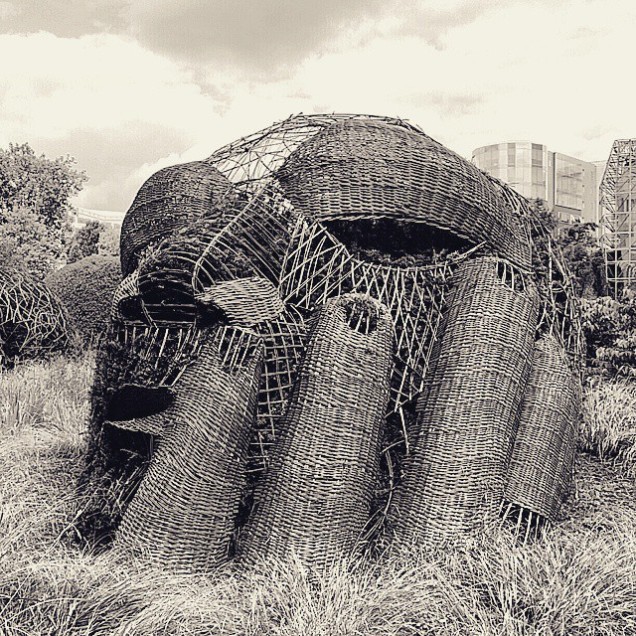 “Opera is when a guy gets stabbed in the back and, instead of bleeding, he sings.”
Robert Benchley 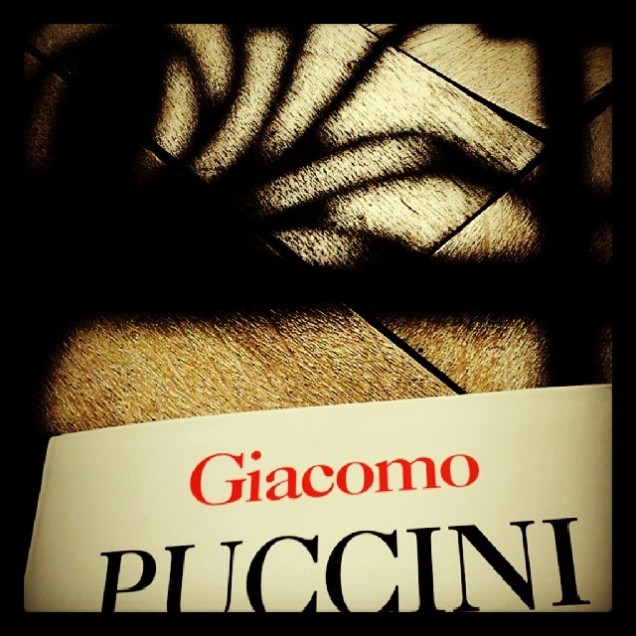