A few years ago I read an interview of a teacher, he was smart and interesting. The last question from the journalist triggered a shift, though. What was bothering him? His answer was a surprise. It was something like:

“What bothers me is that in every class I taught in my career I found the same typology, with very little variations : in every classroom of 15 years old students, you find a sporty, a fat kid, a funny idiot, an angry rebel, an introvert girl, a shy blond, a dreamer, a goth, a nerd. That’s boring!”.

“I empty my head in front of stupid TV”.

How TF do you translate a Style? There’s a witchy case:

Marguerite Duras was a French writer with a very special style. It’s difficult… even to define it! And of course it’s a part of her wizardry.

It’s between spoken language and a modest incantatory style. It’s full of mistakes, like a dyslexic person with strokes of genius. It’s gorgeous, blazing and magic… and completely quirky at the same time.

Therefore when you read Duras you have to let go something, a logical normal way to accept narration. It’s audacious, fascinating, it swallows you in a strange, new rhythm – a words-witch!

I wanted to write an article about “mean quotes about women”. Here are some :

What does that mean? That these guys were afraid? Afraid of what? A power? Are men defenseless?

I read a book about ambiguity in architecture, therefore I wanted to write “At once This and That, the pleasure of ambiguity”.

Ambiguity is when you can’t decide if this is something or something else. In buildings : a window, a corridor, stairs, everything can be two things at the same time.

Of course it TELLS something, that some architects want, seek this. They hate minimalism, the obvious “clean” thing. They love what I think is the essence of modernity :

To make something to make people wonder and smile, instead of making people say “Ohhh that’s beautiful”.

Of course I love this! Things (and us) can be this AND that, we can juxtapose, rotate, double-fonction, adapt. It’s enrichment, intelligence, faces. A door can decorate. A cook can be a musician. The superfluous is necessary…

How to adapt? What is adaptation? When is it positive, or negative?

Proust is a well known French writer, renowned for his… difficult style. You’ll Google it if you want to try, OK?

Thus, in France (and probably elsewhere) you often hear this “I tried Proust, but I couldn’t finish it”, with a little funny face.

Well, OK, I never finished it either! Reading Proust is like eating a feast everyday. It’s exhausting!

Therefore : you have to make an effort. Each time you plunge in Proust you have to. You’re like “OMG it’s dense!”, then you find the marvels. A bit like opera, you see? If you don’t make an effort, an opera is a boring story with people singing like crazy about stupid dramas. Make an effort to find your own pleasure : voices, performance, music, comparing, etc…

Once you did it, here it is : Proust is a blogger.

One day I explained it to my best friend. She was like “Meh”. OK, I said. I picked up the book, read a page (randomly), and we found an idea. So good it filled the evening in conversations.

The only secret is this : do not take it too solemnly. It’s not a cathedral. La Recherche (“In Search of the Lost Time”) is just a huge great book. If you’re bored, breathe and pass a page. YES. Go on. You’ll find emerald & pearls. It’ll kill you (it’s soo good). One day, it’s enough. Read something else.

In each page you’ll find one or more ideas. Each one could let you thinking smiling watching the sky, like “Ohh, that’s true!”.

He’s a blogger. But he’s better than you, I warn you…

“Every reader, as he reads, is actually the reader of himself. The writer’s work is only a kind of optical instrument he provides the reader so he can discern what he might never have seen in himself without this book. The reader’s recognition in himself of what the book says is the proof of the book’s truth.”
― Marcel Proust, Time Regained 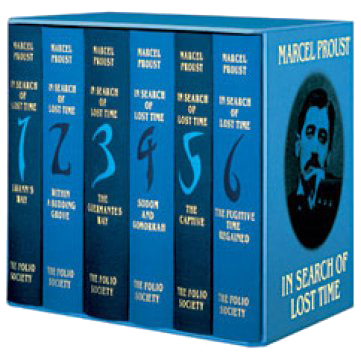 “Now there is one thing I can tell you: you will enjoy certain pleasures you would not fathom now. When you still had your mother you often thought of the days when you would have her no longer. Now you will often think of days past when you had her. When you are used to this horrible thing that they will forever be cast into the past, then you will gently feel her revive, returning to take her place, her entire place, beside you. At the present time, this is not yet possible. Let yourself be inert, wait till the incomprehensible power … that has broken you restores you a little, I say a little, for henceforth you will always keep something broken about you. Tell yourself this, too, for it is a kind of pleasure to know that you will never love less, that you will never be consoled, that you will constantly remember more and more.”
― Marcel Proust

“Beautiful books are written in a kind of foreign language”.

Isn’t it true? What about other textfields? Articles? Theater plays? Dialogs in a movie? Blogs?

I blogged for eight years in French, and then now I write in English, precisely because it’s not my native language. I have to stay simple, to let go, I have to admit I’m not skilled enough to write as I would have liked to. I wrote an article about it : Writing in another language.

…until I realized it can be pleasant or funny for English readspeakers to read my warped little articles here :

But I think Proust says more. I like this idea of inventing a slightly weird style in your own native language, when you write. This is a little string in the harp of writing creativity, I agree, but to me it’s an important string.

When I discover a new blog, I explore the ideas it presents, of course, but I really LOVE to find little leaning elements, the raising eyebrows kind…

…written in a kind of foreign language

Yes sometimes it goes a bit far. I remember my shock when I began to read Faulkner, with his risky unpunctuated flows of conscience pages. Or Joyce, of course.

In France, the infinite, complex and delicious pages of Marcel Proust, the false spoken style of Céline, the gorgeous style of Colette or Jean Giono, the toxic pleasures of Marguerite Duras. I’m French. I read them in an awe, surprised and amazed by how they dare to write.

I do wonder how translators try to… transmit this in English!

Is it a tool? Do you think about it when you write? How?

I could hands can see cooling fingers invisible swan-throat where less than Moses rod the glass touch tentative not to drumming lean cool throat drumming cooling the metal the glass full overfull cooling the glass the fingers flushing sleep leaving the taste of dampened sleep in the long silence of the throat I returned up the corridor, waking the lost feet in whispering battalions in the silence, into the gasoline, the watch telling its furious lie on the dark table.

Faulkner, The Sound and the Fury 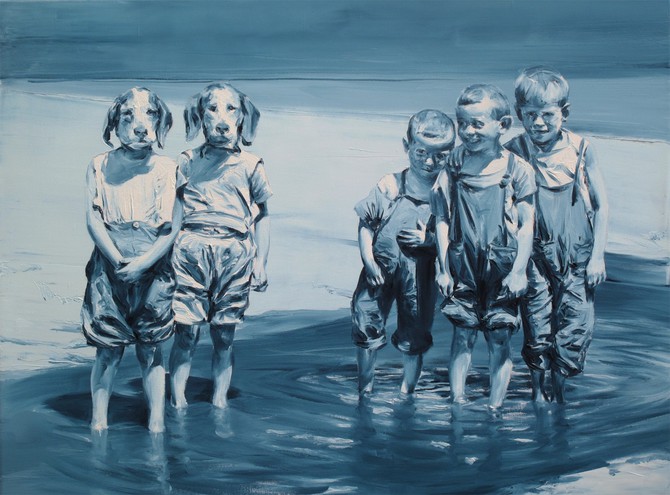 << Virginia Woolf would sit down to thank a friend for sending her a slab of nougat from Saint-Tropez, but, put in mind of France by the package, she soon found herself talking only of the novel. “My great adventure is really Proust,” she wrote, “I am in a state of amazement; as if a miracle were being done before my eyes. How, at last, has someone solidified what has always escaped—and made it too into this beautiful and perfectly enduring substance? One has to put the book down and gasp. The pleasure becomes physical—like sun and wine and grapes and perfect serenity and intense vitality combined.” >>

I read in a Claude Roy diary, as he’s around 70 years old, that he would like to reach this season, this state : “Le temps du cœur triste et de l’esprit gai” – the time of the sad heart and the merry spirit.

Here I have a vocabulary problem : is “gai” happy, merry, gay, jolly? I don’t know. I chose merry.

But I’m very fascinated by this “goal”, from an aged author I liked very much. As if he knew he could never heal his heart. But, knowing this, building his own happiness, a “merry spirit”. This touched me, a lot.

Just read an article evoking Robert Osborne, a TCM Television Presenter who just died at 87 years old. It is told that Olivia de Havilland had with him :

One phone call a week, for decades.

Awwweeee! (-> this was the sound of my merry spirit). I wish I had a friend so close that she would call me once a week until I die at 87. Like a whatever-happens-I-want-to-talk-with-you. Awwweeee again (my merry spirit if very merried by this idea).

I read (but where, is it Casanova or Jünger?) about the Venice Purse, a knack which says that when you have to go to a “dangerous” place (which was Venice at the time), you needed to have two purses, one with a little money in case you’re robbed, attacked, knocked out, and another one with the main part of it – well hidden.

It’s just funny to know, but then you realize that when you travel abroad you really have to think about what you do with your passport, the amount of money you have with you, etc. I wonder what this concept can tell us about life in general : Be cautious? Watch the exits? Don’t put all your eggs in the same basket? But also : GO to places where you need to think about the Venice Purse, right?

Venice, in French, is VENISE. A perfect word to say : Venizzz. Elegant as a swan, right? Venice is more like braking at the end. No good. French better, sorry.

Elmore Leonard says somewhere about novels writing : “If it seems written, I rewrite”.

And a paradox many artists know well : work, work, work, until nobody sees you worked. It’s an interesting goal, and the path itself is enthralling too. How to reach?

There’s a balance to find, I suppose. It means you have the eyes to know when it’s not OK, when it is OK. Experience.

Well I have a vocabulary problem again. When do you use “enthralling“, dear? Can you say that about a person? How is it radioactivitied? Thrilling? Fearful? Exciting? Or more like “plainfully satisfying”?

I watched the Iowa episode of Aerial America yesterday. It’s amazing how many times I hear “French” in these. Detroits and Illinois were “frenchised” words, and how Iowa is a piece of this territory called Louisiana, the US bought to the French 214 years ago.

These TV programs tell me how BIG are the United States. Tonight I’ll watch Illinois, following the path of Bill Bryson’s book across America in car (cf Fixin’to traveling in the USA).

I stop here. Next Chronicle next week. Here’s le hug by Ze French :